Parliamentary Alliances in the fight against hunger

Kohistani and Amin: the faces and voice of Afghan women 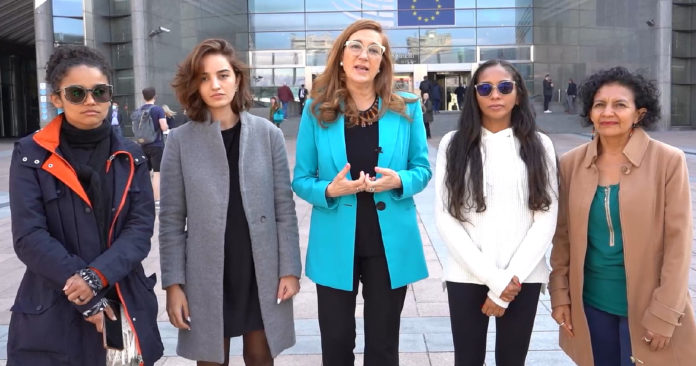 Environmental Defenders in the Amazon

We met in the European Parliament with four women environmental defenders, working to protect the environment in the Brazilian Amazon and in the Amazon in Colombia.

Marina de Oliveira, Larissa Santos, Kelly Silva Barbosa and Constance del Pilar Carvajal are in Brussels to talk about the future Due Diligence Directive. Thanks to this legislative instrument, the European Union and businesses will have to respect the environment and take responsibility for their impact on it and on human rights.

The European Union and all of us have a major challenge to boost the ecological transition and protect human rights in Europe and beyond, prevent ecocides and redress the victims.

They are all women at the forefront of the defense of the environment and human rights. Because when they defend the biodiversity of unique ecosystems like those in the Amazon, they are defending everyone’s right to a healthy environment.

Environmental activists deserve all our respect, admiration and recognition. Their daily work is certainly not easy, and is often hindered by a myriad of situations of persecution and harassment. It is important to highlight their causes and listen to their experiences in order to prevent disasters such as the one in the Vale dam from occurring again.

She is a project coordinator for the communities affected by mining in the Archdiocese of Belo Horizonte in Minas Gerais, Brazil. She is active from Brumadinho, the place of the where 272 people were killed by the collapse of the tailings dam of Vale S.A. She holds a degree in International Relations with a master’s degree in the co-optation of public spheres by the mining multinationals.

She is a journalist and political coordinator of the Organisation Justiça nos Trilhos. Shee works in defense of human rights and nature in the Brazilian Amazon.

She lives in Piquiá de Baixo and is a graduate in Pedagogy. She is Catholic and works closely with the Youth Ministry and the Combonian Missionaries. Since she was 16, she has been a social activist fighting against environmental and social impacts, thus, making it possible for people to become aware of human rights violations.

She is a socio-environmental activist and human rights defender. It belongs to the collective Rios and reconciliation and to the table of Territory and Life. Guest teacher of the IMA agreement — UPB Putumayo. She’s a Floral Therapist. She currently holds her PhD in Latin American Studies.

Previous article
Kohistani and Amin: the faces and voice of Afghan women
Next article
Parliamentary Alliances in the fight against hunger
Share
Facebook
Twitter
WhatsApp
Telegram