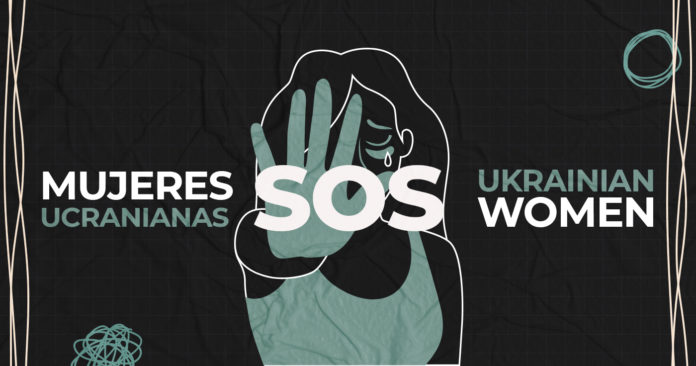 Since Putin invaded Ukraine on 24 February, the photographs of women giving birth in underground subway stations and of newborns being rushed to air shelters as well as millions of people fleeing the conflict have shocked us all. According to UNHCR, almost 90 per cent of refugees are women and children, including unaccompanied minors.  As the conflict continues, each new wave of refugees holds more vulnerable people than the previous one. One of the greatest dangers that women, girls and adolescents face is to be captured by trafficking networks for the purpose of sexual exploitation. This risk is of such magnitude that there is an urgent need for a common commitment at European level against trafficking, as a central part of the Union’s humanitarian response to the conflict. From the European Parliament, I have urged the European Commission to prioritise attention on this important issue.

According to a 2019 UNFPA study, around 67 % of Ukrainian women have reported having experienced some form of violence since the age of 15 and one in three has experienced physical or sexual violence. For millions of women and girls in Ukraine, including those who have lived in the shadow of the conflict in the east of the country over the past eight years, gender-based violence is a serious problem that unfortunately they know very well. Before the Russian invasion, Ukraine was already among the countries with the largest number of victims of trafficking for the purpose of sexual exploitation in Eastern Europe. IOM estimated that 46,000 Ukrainians were victims of it between 2019 and 2021. Similarly, the Organisation for Security and Cooperation in Europe (OSCE) documented between December 2019 and May 2021 the reception of multiple reports of cases of sexual exploitation in exchange for food or money, as a survival tactic. Ukraine was a pre-war country of origin, transit and destination of women, girls and children trafficked for the purpose of sexual exploitation.

This reality, caused by inequality, has worsened since the beginning of Putin’s war and is spreading across neighbouring countries that are hosting refugees. In addition, it is estimated that 80,000 women will give birth in the next three months in Ukraine, many of whom will face a lack of access to basic healthcare. The separation of families, lack of resources and unaccompanied and separated children increase the risk of falling into trafficking networks for the purpose of sexual exploitation. In Ukraine, more than 4.9 million people have fled in search of refuge in neighbouring countries such as Poland, Hungary, Slovakia, Moldova and Romania. An additional 7.1 million people are internally displaced (as of 18 April). As a result, the risks of human trafficking are evident. Numerous NGOs have reported cases of attempts of trafficking of Ukrainian refugees at borders or reception centres.

The protection of girls, adolescents and young women is now crucial as part of the European Union’s response to the humanitarian crisis resulting from the conflict. Specific and effective resources should be allocated to gender-based violence prevention programmes to protect girls and women from trafficking networks. While it is true that the European Commission, by developing the “Common Plan to Combat Trafficking in Human Beings: preventing trafficking in human beings and helping victims“, has planned to strengthen European coordination in the reception of people fleeing the war in Ukraine, more immediate emergency measures are urgently needed to respond to the urgency of the current humanitarian crisis.

In this regard, I have addressed Ylva Johansson, Commissioner for Home Affairs, and Helena Dalli, Commissioner for Equality, to suggest the creation of a European hotline to prevent the recruitment of Ukrainian refugees by human trafficking networks, with special focus to women, children and girls. I also wanted raise the urgency of continuing to take measures to improve our coordination at border crossing points and reception facilities, to ensure accurate registration of refugees and their access to the necessary documentation, including residence permits and essential services.

This European hotline would be a toll-free telephone number, so that victims or potential victims of trafficking in human beings among Ukrainian refugees in the Union can seek immediate help to prevent them from being captured by human smuggling networks. The creation of this assistance telephone number must be accompanied by a significant publicity campaign for the service and close coordination between the police forces in all Member States. This is necessary to ensure that, regardless of the Member State of transit where the victim is located and requests assistance, the response is coordinated at EU level so that traffickers can be arrested and victims stay safe.

It is essential to redouble all efforts and put in place specific measures to prevent and combat trafficking in persons from Ukraine, an already endemic problem in the country, which is undoubtedly being exacerbated by Putin’s aggression. It is a moral obligation, in line with the fundamental principles of the Union, that we create a safe area for all refugees, especially the most vulnerable ones.