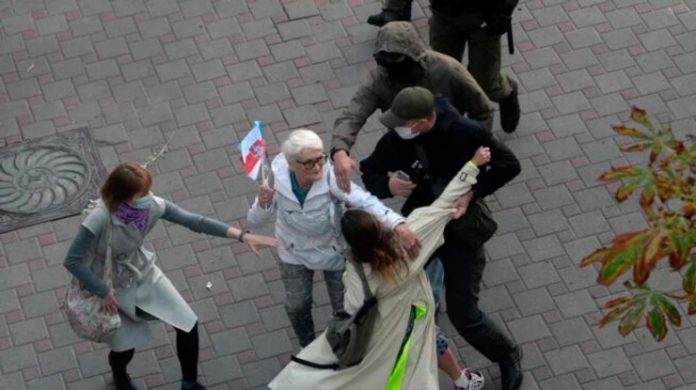 The brave women of Belarus

Svetlana Alexievich – the distinguished Nobel Prize winner in Belarusian literature — said that the problem of authoritarian regimes is that they make citizens accomplices for fear. It is true, but sometimes the tiredness of a population subjected for years outweighs fear.

In Belarus, the fraudulent elections of 9 August, in which Alexander Lukashenko claimed 80 % of the votes against opposition candidate Svetlana Tikhanovskaya, marked the last border of fear after 26 years of rule of the Lukashenko regime.

Society, and especially women, have put an end to the time of fear, which is now the time of hope.

Society — and especially women –have put an end to the time of fear, which is now the time of hope. In this peaceful revolution starring them, hope is represented by the determination and courage of leaders such as Tikhanovskaya, Maria Kolesnikova and Veronika Tpsekalo, united in the presidential campaign with a very simple program and yet aimed at changing everything: the cessation of the repression of dissent and the holding of free and fair elections.

Since 9 August, there have been massive and peaceful mobilisations unprecedented in the country’s recent history. Lukashenko’s response, both symbolically and in the material deployment of force, has triggered arrests, torture and violence against citizens and journalists.

According to data from Belarusian social organisations, more than 7,000 people have been arrested. The Okréstino detention centre has become a real torture camp, with more than 450 cases of ill-treatment being investigated by the human rights centre of Viasna, which ensures that no such repression has been experienced in the country since the Nazi occupation. Progressively, all members of the Presidium of the Coordinating Council have been arrested or forced to leave the country under threats or under the use of force, with the sole exception of the Nobel laureate, Svetlana Alexievich, who has been investigated and rebuked at her home by the authorities. Several European diplomats came to her home to avoid a possible arrest.

For all these reasons, the Citizens’ Delegation to the European Parliament has proposed the nomination of the Belarusian democratic opposition to the Sakharov Prize for freedom of conscience, which recognises annually the work of defenders of human rights and fundamental freedoms.

We believe that this award would be an impetus to a society that risks freedom at a historic moment. We also believe in the ability of this award to allow the EU and Belarus — we are talking about European societies — to recognise themselves.

Thanks to the information through the Telegram channels — fundamental in the mobilisation in Belarus — our children know what is happening in the country and identify with young people like them, who know about the freedoms and who fight for the conquest of theirs.

To understand well what it means to be a woman and not to be afraid in Belarus, we must understand that we are talking about more than 26 years of repressive regime, in a country where the death penalty remains in force.

The situation in Belarus, where Lukashenko continues to punish any dissent and appeal to Russia’s support, is extremely fragile. The European Union is a normative space, based on values that define not only who we are, but what we aspire to be.

Silence in the face of the brutality of the repression of the Lukashenko regime will make us complicit. The identification of the EU society with the Belarusian society we are talking about necessarily entails a responsibility.

The European Union must recognise and accompany the efforts of Belarusian society. Firstly, by acting to bring an end to violence by the authorities and for the release of political prisoners and an end to impunity. There is an urgent need to make progress by imposing the sanctions already announced by the Council on those responsible for human rights violations.

Recent events show how the lifting or relaxation of sanctions on Lukashenko and other Belarusian leaders since 2015 has been a mistake: they collaborated on a pre-electoral make-up of the Lukashenko regime, which, years later, continues to show their true face.

From the European liberal group to which Citizens belongs, Renew Europe, we are working to develop a European framework of sanctions on human rights and corruption similar to the US Magnitsky Act, which could facilitate such processes in the future. In no context is it possible to move towards peace and stability without justice for citizens.

The EU and its Member States should also support the demands of the Belarusian democratic opposition in international fora, which include holding a special session at the UN Human Rights Council and sending an international UN observation mission to independently document the situation and contribute to the investigation of police brutality and abuses against the population during the demonstrations.

The citizens of Belarus face a historic task. The European Union must remain by their side. Fear can never be a toll on life.