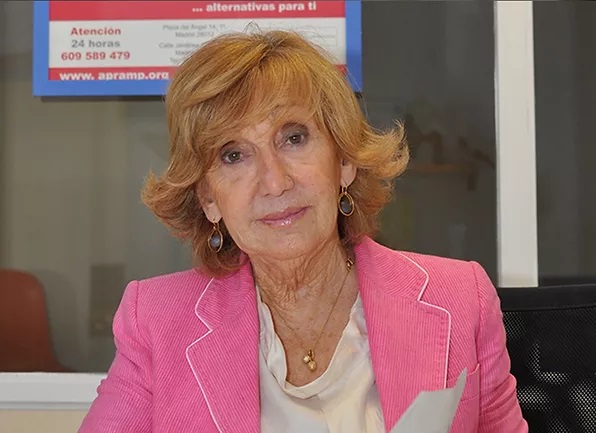 Rocío Nieto is the Founder and President of the Association for the Prevention, Reintegration and Care of Prostituted Women and an activist against trafficking and exploitation.

​Rocío Nieto is a woman at the forefront of the trafficking and exploitation of human beings, who holds a vital trajectory marked by constancy, tenacity, and commitment. Rocío is the founder and President of the Association for the Prevention, Reintegration and Care of Prostituted Women (APRAMP). She has a degree in Social Work from the University of Comillas in Madrid and has always been linked to the defense of the rights of women and the most vulnerable. In the beginning of her professional career, she worked with groups of women who suffered domestic violence, with children with mental disabilities, and took part in “Proyecto Hombre”.

APRAMP is today one of the most important associations at European level in the fight against sexual exploitation and trafficking. This year, its president, Rocío Mora, received the heroin award from the United States Department of State’s 2021 Trafficking in Persons Report (TIP). But this association would be impossible to understand without its founder, Rocío Nieto.

Rocío Nieto founded APRAMP in 1984 with the aim of preventing and eradicating sexual exploitation and trafficking in human beings from its origin. From the outset, she defended and promoted the rights of persons suffering from sexual exploitation and trafficking to regain the freedom, dignity and autonomy necessary to start a life beyond the control and abuse of its exploiters. With this purpose, she focused on re-employment programmes. Her last project in this regard, namely “Pespuntes de Libertad”, focused on fashion design as a means to empower victims of exploitation, and help them develop professionally. Her brand managed to parade in the latest Cibeles’ catwalk.

Rocío Nieto has always placed victims of sexual exploitation at the centre of its activity. Victims need justice, reparation for the harm they have suffered and real alternatives that guarantee their freedom and dignity. Through her association, she has developed important programmes for the prevention, detection and identification of victims, as well as other projects aimed at guaranteeing access to their rights and meeting the needs of victims when they are not covered by public services.

Rocío is an activist who has managed to network with other women’s associations because of her broad and inclusive way of understanding the struggle for equality, always understanding it as a collective work. She is today a reference for many women in Spain for whom her commitment was an example to follow. Many women consider her a role model. She is the best expression of a generation that fought in the dictatorship for freedoms and women’s rights, especially beaten and oppressed at that time.

Rocío Nieto has changed the lives of many women, and, through her association, APRAMP, she continues to do so today. She and all the women who work in her association are an excellent example of what this project “Women at the Front” wants to make visible and vindicate.