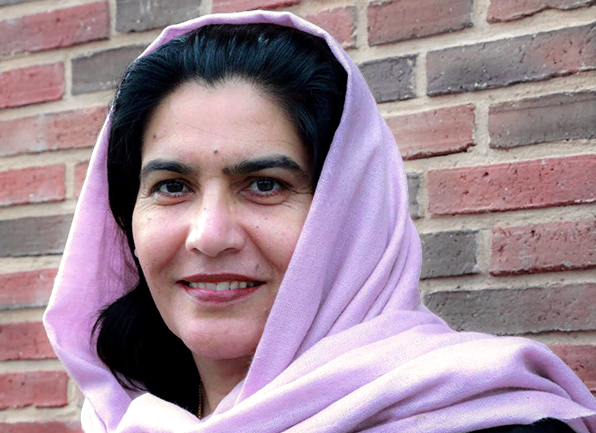 Activist for the right to education of Afghan women and girls. She evacuated hundreds of women from Afghanistan following the Taliban’s takeover of Kabul.

Born in 1966 in Afghanistan, Rahela Sidiqi has been at the forefront of the fight for women’s equality and greater progress of rural communities in Afghanistan for 35 years. When she was 16 years old, her father, chief of police, was killed by the rebels during the Soviet occupation of Afghanistan. Her mother raised her with her 6 brothers and 3 sisters. Educated in the importance of values and education, she graduated from Kabul University with a degree in Agriculture.

In 1992, the dissolution of the Soviet Union led to the economic collapse of the country and the outbreak of war between the mujahedinfactions. As a result, Sidiqi left Kabul and fled to a town in northern Afghanistan with her husband and two children. She first worked for Oxfam, helping other displaced people like herself. She then collaborated on projects focused on women with UNHCR and United Nations Human Settlements Programme (UN Habitat). Sidiqi created and developed the Community Forums, a tool to rebuild neighbourhoods and renew local government systems through participatory methodologies, which she developed for more than a decade. The success and popularity of the program made it a target of the Taliban. Rahela received threats and attacks on her family, leading her to leave the country and take refuge in Pakistan. There is where her third child was born.

After the restoration of democracy, Sidiqi returned to Afghanistan, where she collaborated with the Afghan government by designing the National Solidarity Programme (NSP), based on the concept of Community Forums, and extending its reach to more than 20,000 Afghan villages. Between 2006 and 2011, she worked as a Senior Advisor to the Administrative Reform & Service Commission, improving recruitment and management systems and combating corruption.  Sidiqi is a strong advocate of the crucial role that women have played in the country’s progress and the need for their participation in political life. For Sidiqi, women’sempowerment is not only an end in itself, but also an essential component of sustainable development.

Because of the visibility of her work defending women’s rights in rural Afghanistan (still controlled by the Taliban), Sidiqi suffered the attempted abduction of one of her sons, which led her to seek asylum in the UK, where she currently lives.  From Europe, she still is at the forefront of the fight for the human rights of Afghan women and girls.  In 2015, she founded Rahela Trust, an organisation aimed at helping disadvantaged and talented girls and young women from rural background to continue their education, through scholarships and accompaniment. Four years later, she also created Governance and Reform Advisory (GRA), with the objective of improving the governance and performance of the public and private sectors while involving local people and communities in the decision-making of their own development processes.

To respond to the situation in Afghanistan following the Taliban takeover of Kabul in 2021, she has founded a new organisation, Omid International, which provides support to women’s rights activists and young professional women within Afghanistan, as well as in other neighbouring countries.
Rahela has saved the lives of hundreds of people at risk, as well as their families, guaranteeing a safe place for themand coordinating theirevacuation. She also offers them continued support to rebuild their lives in their host countries. She knows the traumatic process experienced by refugeesfirst-hand. She knows the satisfaction of having managed to leave the country together with the suffering for the family and friends who remain behind. She knows the difficulty of leaving a whole life and having to start from scratch. Sidiqi is therefore developing a pilot project in Istanbul and the United Kingdom to improve the integration of refugees, train them and help them to find employment.