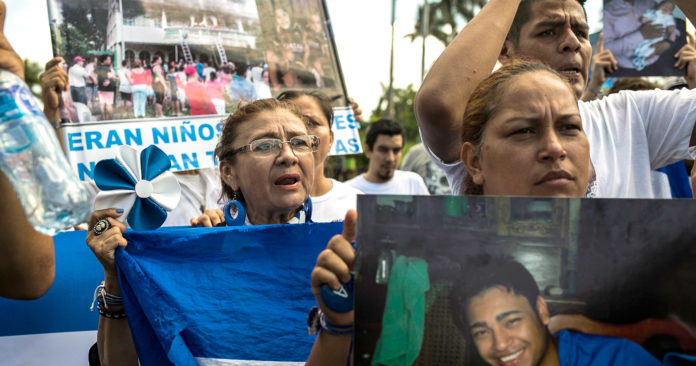 4 years of the April rebellion in Nicaragua: neither forgetting nor impunity

This week marks four years since the April rebellion in Nicaragua, a moment that reminds us of the need to continue vindicating and bringing Nicaragua to the international agenda.

Just a year ago, on April 19, we organised our first session of Women at the Forefront on the situation in Nicaragua through a conversation with women who work tirelessly in the defense of human rights such as Gioconda Belli, Doña Vilma Núñez, Suyen Barahona and Dora María Téllez. We already knew of the horror of the Ortega regime. We already discussed the low probability of a fair electoral process at the end of the year, and we already called for an end to impunity, repression and arbitrary arrests. But, a year ago we couldn’t imagine the brutal repressive wave that it would quickly continue to unravel.

The increase in the number of political prisoners has been exponential, focusing on all those that could pose an electoral risk to Ortega. The Chipote has become a real torture centre for the solitary confinement to which some political prisoners continue to be subjected, at the same time that they are subject to constant harassment of their families, degrading treatment and deplorable conditions. Suyen Barahona and Dora María Téllez continue to be part of more than 170 political prisoners in Nicaraguan prisons today. In turn, so many of them and other people continue to leave the country as repression and persecution escalate.

On April 20, the Permanent Commission on Human Rights (CPDH) – which follows the cases of numerous political prisoners — was 45 years since its founding. Precisely on that day, the Orteguista National Assembly placed on its agenda the cancellation of the legal personality, in addition to 24 other NGOs, already adding 160 organisations to the list of persecution of the regime that began in 2018.

Structurally, the regime had prepared the ground for this to happen, at the judicial level. This year, I have been responsible for the latest Report on Human Rights and Democracy in the World and the European Union’s policy in this regard (2021). Yesterday, the European Union’s external service also published its annual update. It clearly states that “the judicial system in Nicaragua has become an arm of repression for Ortega.” The elections were a shame. Freedom of press has been destroyed and attempts are still being made to destroy the social fabric, even if they have failed to do so.

In Nicaragua, many crises overlap, but the spirit of April remains in resistance. Recently, I have had the opportunity to meet with environmental activist Amaru Ruiz, president of the Nicaraguan River Association, on his visit to the European Parliament. The situation of environmental defenders in Nicaragua is critical. Also that of indigenous peoples. Murders and persecution have increased in recent years. The destruction of biodiversity in Nicaragua is alarming, being one of the countries globally with a most dramatic increase in deforestation.

Women also continue to face systemic discrimination and aggression. One in four women are raped and 83 per cent of cases of sexual violence occur against girls and adolescents under the age of 18-33 per cent against girls under the age of 12. According to the European External Action Service, gender-based violence and femicide continue to be unabated: in 2021, civil society organisations recorded 71 consummate femicides, the same number as in 2020, and an increase in frustrated femicides from 115 to 140.

Ortega’s international isolation is almost complete. The recent expulsion of the apostolic nuncio Sommertag and that of the head of the mission of the International Committee of the Red Cross (ICRC), ThomasEss, has further deepened this framework of isolation. In addition, the condemnation by different Latin American countries in international forums is growing and important, such as the latest resolution of the Human Rights Council.

The degree of horror the dictatorship has reached in Nicaragua is such that it is impossible to remain silent before it. We saw Arturo McFields’ courageous gesture to the OAS and we know that there are many more people like him than from, either from within the regime or as officials, in a way they are victims. They must take a step forward for Nicaragua on the side of civil society. We want an isolated dictatorship, and a European Union that is close to the Nicaraguan people. We, the European Union, and the European Parliament, in particular, will continue to be close to them through the programmes that are funded for civil society, including through the Protect Defenders project.

However, there are other areas where there is still much room for action and that have to deal with. In the first place, the loans the Nicaraguan government receives from financial institutions. In the European Parliament’s latest resolution we called on the Financial Action Task Force (FATF) to establish the necessary coordination with the United States Office of Foreign Assets Control in order to guarantee international financial security against the illegal operations of the Ortega-Murillo regime and its collaborators, as well as its commercial and active relations in various European countries.

If we do not avoid it, Ortega’s regime will continue to sink the Nicaraguan population, the second poorest country in Latin America. Because of the widespread corruption of the regime, the country is not only indebted: with Ortega-Murillo he also becomes impoverished, he becomes unfeasible.

Thirdly, we must also make progress on the impact of sanctions. From the European Parliament we got them to reach Murillo. But, Daniel Ortega must also be sanctioned, him and his entire family circle, who understand the country as their patrimony. The judges that since February have been imposing absurd and illegitimate sentences on political prisoners, are also violating human rights. They must also be subjected to EU sanctions.

Finally, let us remember that, according to the United Nations Human Rights Office, there have been at least 328 deaths in the context of the protests, without justice for them. Nor for the hundreds of political prisoners that had already existed in Nicaragua before the repressive wave of recent months. We can’t forget so many families. As Ms Vilma Núñez pointed out a few weeks ago, impunity has become institutionalised in Nicaragua. But if something also represents the spirit of April it is that longing for transformation and hope, for union, after all.

A few weeks ago, Nicaraguan civil society won a great victory, even bigger in such a hostile environment as it is facing. At the end of March, the United Nations Human Rights Council approved a resolution establishing an investigative and accountability mechanism for Nicaragua, appointing a group of three experts to collect, analyse, document and, above all, preserve information on human rights violations that have been taking place in the country since 2018.
It is a victory for civil society and the collective 46/2. This group was made up of human rights organisations that have monitored the non-implementation by the regime of recommendations made by the Human Rights Council and the Office of the High Commissioner. We know that the recommendations may continue to be ignored, but we also know that we will have the evidence, and the documentation, by the time the day comes to bring those responsible to justice, nationally or internationally. Because impunity is not forever. There will be a different April for Nicaragua and then we know that there will be no peace if there is impunity.

Previous article
Working towards establishing an early emergency system against trafficking in Ukrainian refugees
Next article
The European Parliament’s response to the overturning of ‘Roe vs Wade’: for the right to legal and safe abortion
Share
Facebook
Twitter
WhatsApp
Telegram